It is hard for anyone following the technology scene and/or gaming world not to be aware of the hype storm around Nintendo’s next console. Originally codenamed as Nintendo NX (announced on 17th March 2015 by the late CEO Satoru Iwata alongside announcing an alliance with Japanese mobile gaming firm DeNA ) the Nintendo Switch is the gaming giant’s new successor to the failed WiiU of its current/last generation.

The Nintendo Switch has at its core a new concept, one which Nintendo was very keen to keep under wraps for as long as possible, even electing not to showcase it at E3 in 2016, probably due to fears of others copying the idea before its release. Indeed other devices have been pointed to by various people as pre-dating the Nintendo Switch as concept and released device, the most prominent of these being the Morphus X300

The concept: Play your Nintendo video games on your TV and then when you need to go take the tablet console out of its dock with bespoke controllers that attach either side of the tablet console, this lets the player take the game on the go. In essence the Nintendo Switch represents a merging of home console and mobile console (the 3DS) lines into one, although Nintendo still refer to the Switch as a Home console 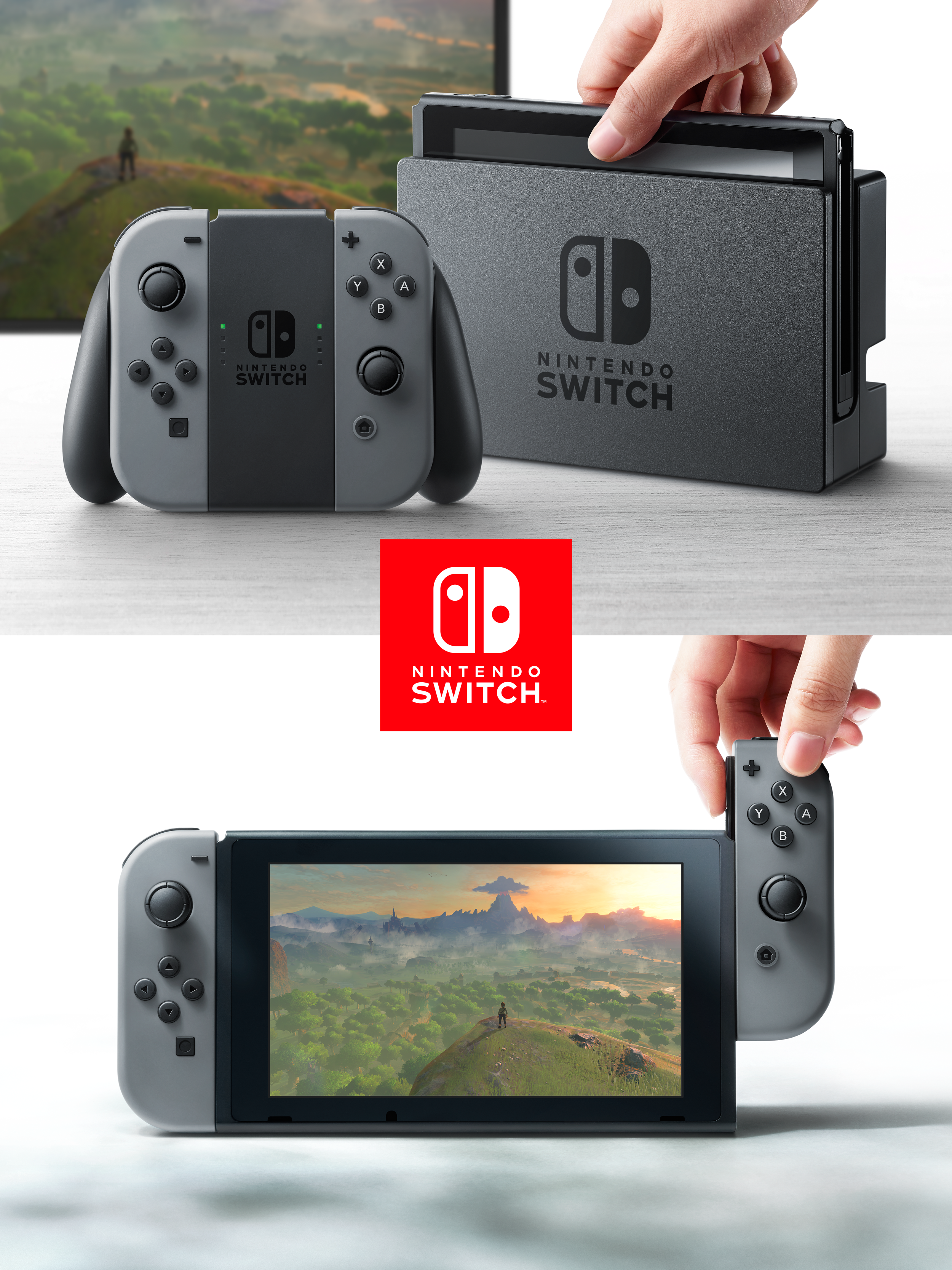 Nintendo has remained rather tight lipped about its new flagship console, other than a trailer, no real official confirmation or denial of any rumours have been made by Nintendo, this has raised the anticipation of the console even further with prominent ‘leakers’ proving their leaks to be true based on the trailer for the system released in October. Prominent leakers in this instance are Laura Kate Dale and Emily Rogers amongst others including news outlets Eurogamer and Digital Foundry

As part of the trailer reveal, Nintendo also released a list of some of the 3rd parties that are working with Nintendo to deliver content for the Nintendo Switch 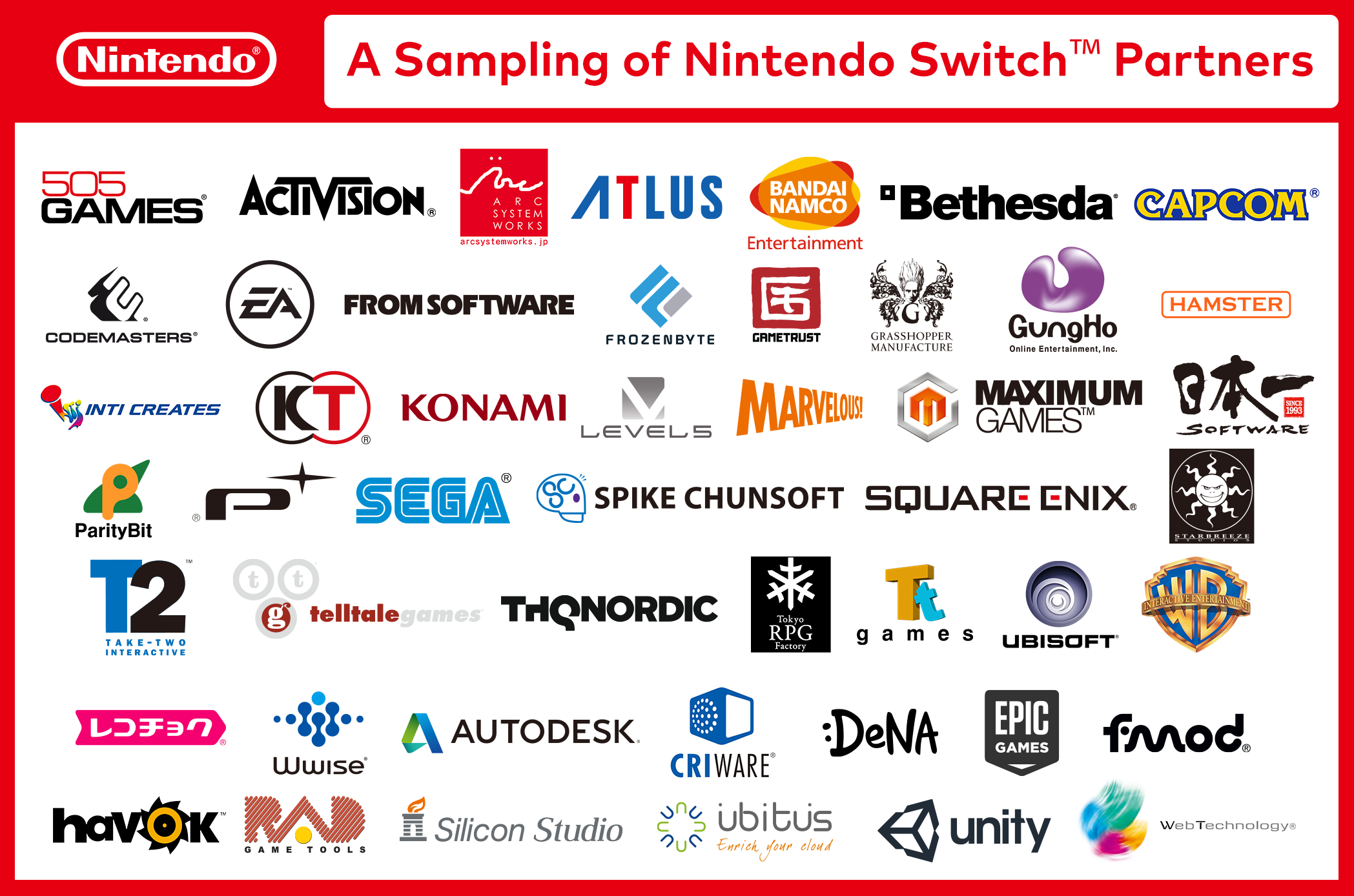 In addition, certain patents filed by Nintendo, have suggested additional details, which are open to interpretation in part, but also confirming suggestions and leaks that have come to light from other sources.

From the flurry of details being asserted/disproved, one analysis based on a patent filing sees the release of a peripheral to be used with the Switch in order to have Virtual Reality possible on the device, other leakers and sources (e.g. video from Obe1plays) are now calling this more than likely to be introduced in the coming year, but probably not a launch peripheral.

General anticipation for the console seems to be at an all time high, with ‘hype’ reaching fever pitch with fans, critics and press, this should be credited to Nintendo’s media campaign and ability to generate leverage from their IP and reputation. I am genuinely excited by the console, I think its definitely going to offer the gamers something that ‘they did not know they needed’, all neatly packaged up in a Nintendo style shiny package.

Mobile gaming is extremely popular, particularly so in the Japanese market, this is something that no doubt Nintendo has been observing and noting, resulting in a pivot from their earlier position of not developing games for smart phones to now committing to a series of games on platforms like iOS and Android. The strategy Nintendo seem to be adopting with their dedicated console hardware is to consolidate the portable range (3DS, new 3DS) and their home range (WiiU) into one line, the Nintendo Switch. The strategy should save development costs and in theory bolster one market being seen as in decline (home console) with the growing and possibly more lucrative smart phone gaming market. This direction is clear from the concept of the Switch. Nintendo has even merged its games development teams from handheld and home consoles into one per IP as reported by gamesindustry.biz in January 2013. So the now almost expected notion of a Nintendo console having a gimmick to sell it, may not be the sole motivation (if at all) for the Switch, it may be an attempt to grasp and shape the direction of the ‘big N’, and quite possibly assure its future for the coming Nintendo fans/critics not yet born/bothered!

Nintendo have confirmed that the Nintendo Switch will release in March 2017, and have promised more in depth details at their Switch event on January 13th (4am GMT). The event will be streamed live from Tokyo available at https://www.nintendo.co.uk/switch, and then will be followed by a Press event at key locations around the world, include a London event, where I will be attending to report on my first hands on experience of the switch. Watch out for details of how to watch that content. Of course you can always listen to my review on the following Indus Gadget Guru slot on BBC Radio Manchester and Lancashire in January 2017.